A partner at Market Forecasting Academy, Bo has been a featured speaker internationally for decades and has developed a reputation for trading live in front of an audience as a real-time example of what it is like to trade for a living.
In addition to his two books for McGraw-Hill, Mastering Futures Trading, and Optimize Your Trading Edge (translated into German and Japanese), Bo has written articles published in top publications such as TheStreet.com, Technical Analysis of Stocks & Commodities, Trader’s, Active Trader Magazine and Forbes to name a few.
Bo currently spends his time with his wife and son in the great state of Maine where he trades, researches behavioral economics, and is a passionate sailboat racer.
He has an MBA from The Boston University School of Management.
Market Forecast For The Week Of 2/27/21
Written By Bo Yoder, Published 2/27/2021
To Lean How To Accurately and Consistently Forecast Market Prices Just Like You See Me Doing Here Each Week, Using Market Vulnerability Analysis™, CLICK HERE to visit Market Forecasting Academy for the Free 5 Day Market Forecasting Primer. 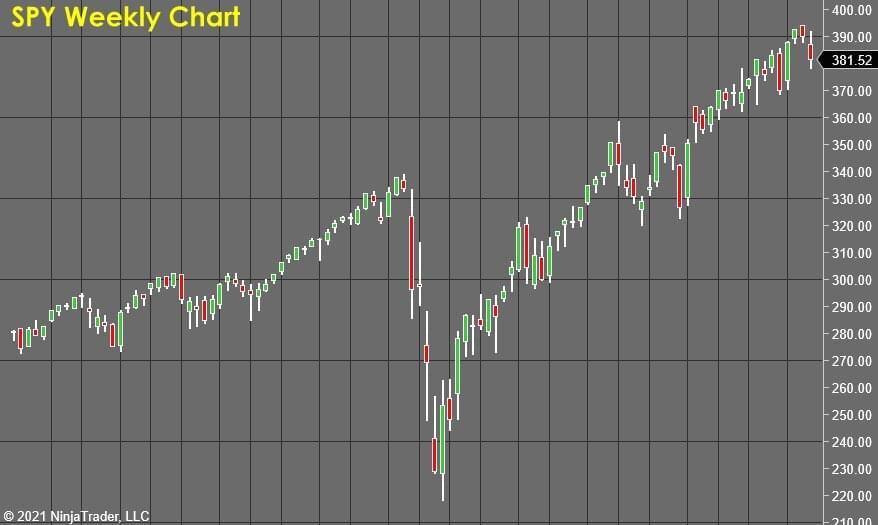 The S&P 500 (analyzed here using the ETF:SPY) started it’s correction this week as the odds correctly suggested to me last week.
While it is true that the bulls are losing control of the market in the short term, our supply/demand measurement tools are showing that there is still a strong buy side imbalance, so we are still expecting any pullback to be little more than a correction.
My forecast for the S&P is that we will see continued weakness and I’d expect to see price hit the support zone near $360-$370 at which point we can take some supply/demand measurements and see if a pullback entry for a long is in alignment with the odds.

Morgan Stanley (MS)
The stock of Morgan Stanley (NYSE:MS) broke out to a new 52 week high and was rejected. This forms what I call a “peek double top”, as price “peeks” out to a new high, then gets pounded just like one of those whack-a-mole games at the fair!
This is a horribly disappointing failure for all the long term investors as well as the momentum traders, and tends to provoke a quick selloff back down to test areas of support where trailing stop loss orders are hidden.
My forecast for this stock is that this price behavior will trigger a quick wave of selling. With the weakness of demand forces that I am seeing in my market forecasting tools, I expect this stock to drop quickly back down to test the green zone where profits should be taken. 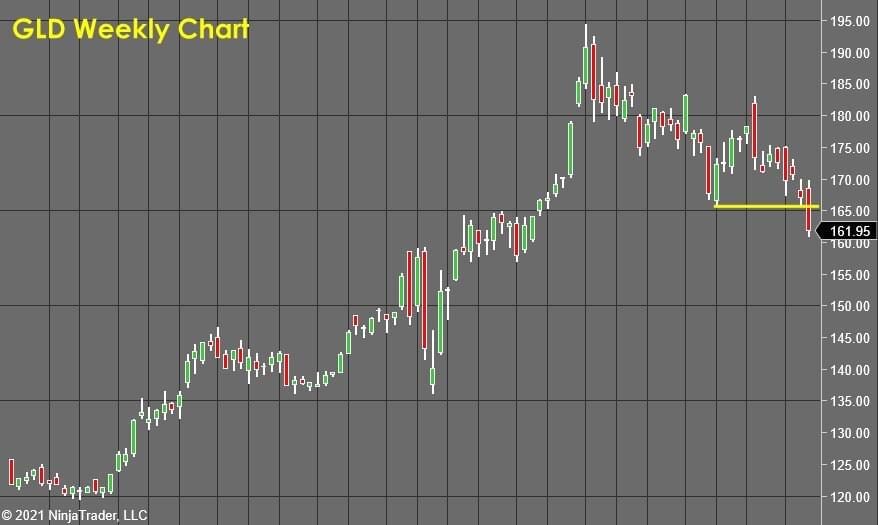 GOLD (ETF:GLD)
With all the money that the world’s central banks have printed in recent years, the conventional wisdom is that gold should be skyrocketing as a “hedge” to inflation.
But supply and demand forces are the ONLY thing that drives a market, and the gold market (analyzed here using the ETF:GLD) has been locked in a multi-month correction as it drops back away from it’s highs near $2,000 per ounce.
I have been patiently waiting for a buying opportunity in gold, as my forecasting tools are indicating that this market will likely at least retest the highs, offering a couple of hundred dollars per ounce in upside potential once a high probability bullish entry is offered.
Price did indeed break below the recent lows near $166 per share, as I forecasted last week. This breakdown dashes the hopes of the bulls who were praying that the correction would end as a double bottom. Now they are selling in frustration this week as we see, and they will be feeling quite surprised and depressed.
While there is a growing short term bearish cycle of depression and frustration, I would remind you what I said last week…That the deeper timeframe cycles have flipped clearly to the bullish side.
So, what we have in gold is a tug of war between the short term thinkers and the longer term holders. These opposing forces will battle it out, but I believe that eventually, the long term bulls will win.
My forecast for the gold market remains the same….
That the short term weakness I see will drive prices down to a much more attractive level and then offer the patient trader a superb buying opportunity sometime in the next few months. 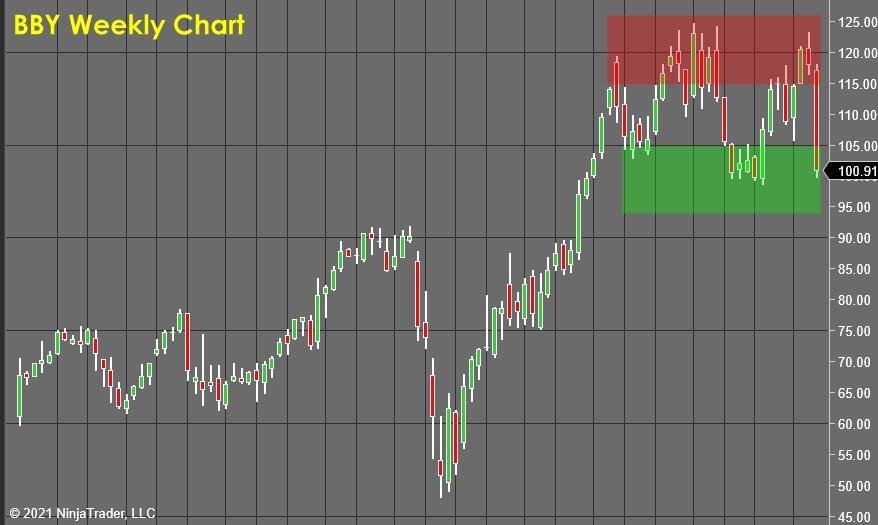 BEST BUY (BBY)
If all forecasts were as simple and easy and PROFITABLE as BBY last week, we wouldn’t know what to do with ourselves!
This successful forecast was targeting the foolish and impulsive gamblers who bought the WRONG STOCK, as they tried to catch a short squeeze in the stock of Bed, Bath & Beyond, which has a similar stock ticker (BBBY with 3 B’s).
There is still a lot of bearish momentum in this stock, and I would expect it to break below $100, but I have to maintain the integrity of my forecasting style, so this trade is considered “Closed for a profit” since it traded down into the green or “take profits” zone. 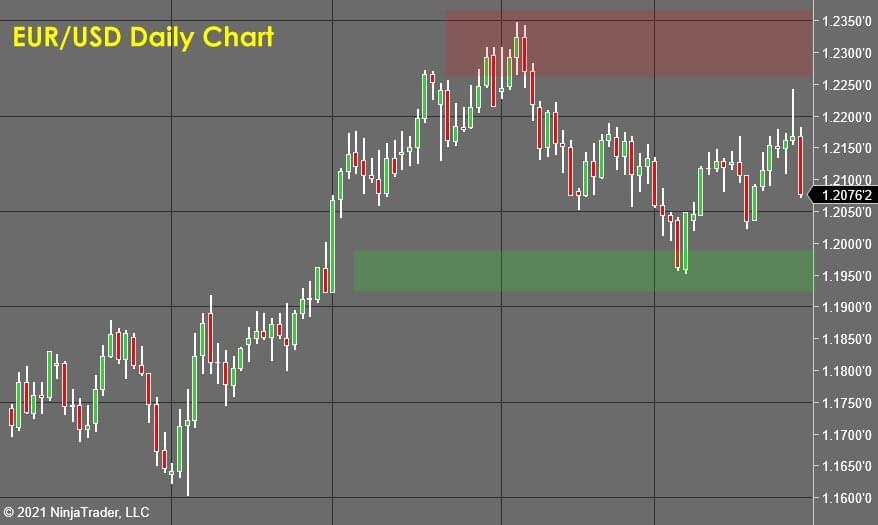 EURODOLLAR VS US DOLLAR (EUR/USD)
As I forecasted last week, the inverse head and shoulders pattern in the EUR/USD (Eurodollar vs the U.S. Dollar.) DID provoke a short lived bullish surge that quickly fizzled.
Unfortunately, the hidden bearish energy in this market that my forecasting tools identified was “heavy” enough to keep prices just a tad below the red zone, so this trade never went “active”.
I definitely am still expecting that green zone to be tested, and who knows…while the odds are really low, there is always the possibility for a second chance entry up in the red zone in the week to come.
While it’s always disappointing to miss the fill you expected, this experience highlights how forecasting price moves and actually structuring A TRADE that has the necessary edge are separate challenges.
Yes, you COULD chase here and get short for a move down to the red zone, but that would be foolish as your risk is big, and your profit expectation is small.
Remember, trading is a business!
Keeping your head and heart OUT of the process is critical to long term success.
You have to play with the math of odds and objective supply/demand measurements which give you the data points needed to forecast with accuracy week after week, month after month.
To Lean How To Accurately and Consistently Forecast Market Prices Just Like You See Me Doing Here Each Week, Using Market Vulnerability Analysis™, CLICK HERE to visit Market Forecasting Academy for the Free 5 Day Market Forecasting Primer.
Privacy Policy | Terms & Conditions | Disclaimer
Copyright © 2021 - Bo Yoder