A partner at Market Forecasting Academy, Bo has been a featured speaker internationally for decades and has developed a reputation for trading live in front of an audience as a real-time example of what it is like to trade for a living.
In addition to his two books for McGraw-Hill, Mastering Futures Trading, and Optimize Your Trading Edge (translated into German and Japanese), Bo has written articles published in top publications such as TheStreet.com, Technical Analysis of Stocks & Commodities, Trader’s, Active Trader Magazine and Forbes to name a few.
Bo currently spends his time with his wife and son in the great state of Maine where he trades, researches behavioral economics, and is a passionate sailboat racer.
He has an MBA from The Boston University School of Management.
Market Forecast For The Week Of 3/06/21
Written By Bo Yoder, Published 3/06/2021
To Lean How To Accurately and Consistently Forecast Market Prices Just Like You See Me Doing Here Each Week, Using Market Vulnerability Analysis™, CLICK HERE to visit Market Forecasting Academy for the Free 5 Day Market Forecasting Primer. 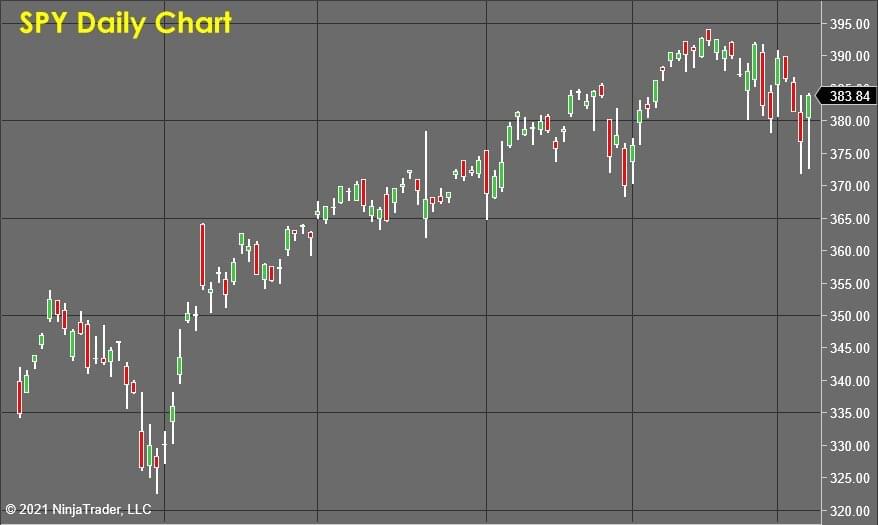 The S&P 500 (ETF:SPY)
The S&P 500 (analyzed here using the ETF:SPY) closed out the week strong, printing a bullish “hammer” candlestick indicating that its correction has likely come to an end.
The bullish pressures we measure using our forecasting tools are showing that there was a LOT of bullish distribution during this pullback. This indicates that the bullish passions will be weak as the trend returns and price pushes back up to the highs.
For the most accurate forecast, I would have to take a pressure reading as the highs are tested in order to determine what the odds are for a double top or breakout to new highs.
Therefore, my forecast for the S&P will be less accurate this week as I have to project what the readings will be as the upside test occurs.
As the week comes to an end, I can forecast that the rally will be unsponsored and will be on the lookout for a false breakout or double top pattern as the highs near $395 are tested.
The risk to reward ratios don’t favor a long position for this letter at this time, but if you are able to look intraday there should be some nice bullish opportunities as this market reaches up to retest the highs. 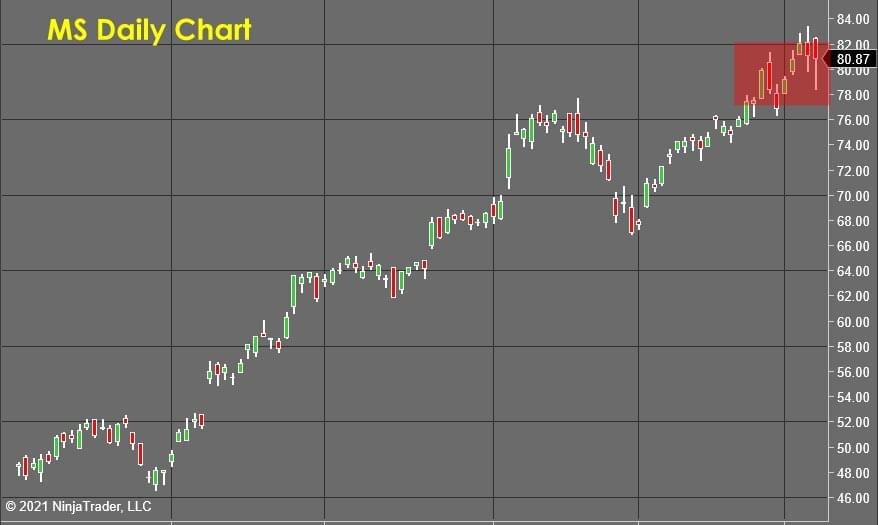 Morgan Stanley (MS)
After breaking to a new 52 week high, the stock of Morgan Stanley (NYSE:MS) was bearishly rejected. This price behavior, coupled with a sharp decline in bullish pressure made for an attractive short opportunity last week.
Unfortunately, the very next Monday the company announced that they had closed on their acquisition of Eaton Vance Corp. and this brought a burst of new buying to the stock.
This buying took price up beyond the highs of the red zone, and thus triggered stop losses as this forecast failed to follow through to the downside. 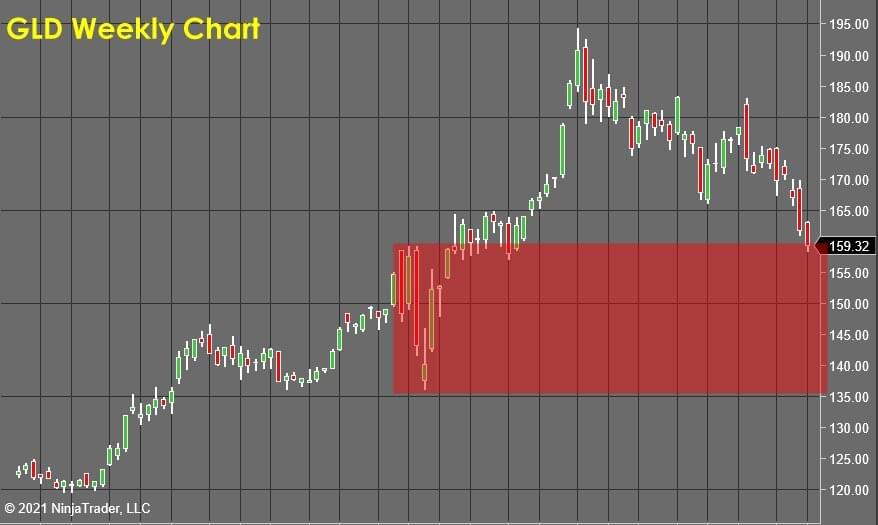 GOLD (ETF:GLD)
It seems that my patience over the last six months is about to pay off as the gold market (analyzed here using the ETF:GLD) has entered an area where the tools we teach at Market Forecasting Academy indicate a reversal is likely.
Unfortunately, as is often the case, the reversal zone (illustrated here in red) is large and imprecise at the moment.
While I have confidence in the forecast, due to the poor risk to reward ratios currently offered…
It’s not worth much in terms of the actual money I could pull from this market, so I still have to wait for the optimal entry.
My forecast for the gold market is as follows….
I see the short term weakness that was forecasted in recent weeks degrading, and as the bearish passions fade away I hope to be able to forecast as sustainable bottom in this market and take a much more precise entry to the long side in the next couple of weeks. 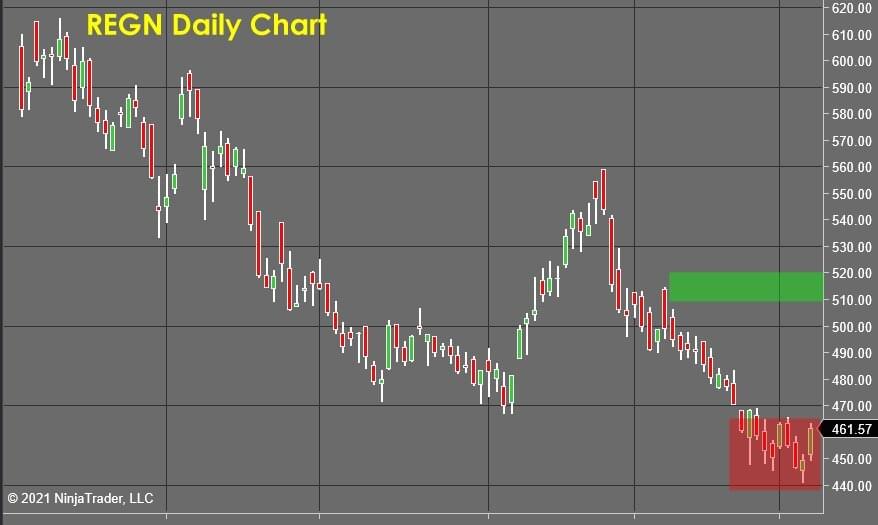 Regeneron Pharmaceuticals (REGN)
The stock of Regeneron Pharmaceuticals (NASDAQ: REGN) set up last week and is currently building a “Breakout/Retest” pattern. When price breaks out above the last swing high near $480, it will confirm the reversal, create a new daily uptrend which should attract a lot more bullish interest to the stock.
My management expectations from last week are still valid….Last week I posted this:
“The highest probability price target is the $510-$520 zone, and I would suggest taking at least ½ profits into the green zone there. If/when that level is reached, I will be able to take a pressure reading and make a much more accurate forecast about how much higher this stock could go. If the momentum traders re-enter this stock, we could lock in gains and surf that wave of buying to much higher prices!
The supply/demand measurement tools I use are kind of like using a flashlight in a dark cave… They give you clear insight into what’s right in front of you, but it’s hard to predict what’s 100 yards ahead.
This constant flow of supply/demand snapshots gives you the information you need to to make very informed management decisions in the moment. With a weekly forecast like this, I can share an entry signal and the highest probability profit target with confidence, but I suspect there is a lot more profit in this stock then I can initially forecast, so will look forward to next week’s readings with excitement!”

EURODOLLAR VS US DOLLAR (EUR/USD)
To compound on top of the frustrating loss in MS as I got “run over” by news, we have the missed opportunity here in the EUR/USD (Eurodollar vs the U.S. Dollar.) which neatly fulfilled the profit targets this week as the inverse head and shoulders proved to be a trap for the bulls as forecast.
While my focus in these weekly communications is to share the best price forecasts I find, these two frustrating trades offer a teachable moment about the real world experiences of the active trader.
Both the EUR and MS forecasts give my brain the opportunity to indulge in wasteful and destructive negative self talk.
It’s “unfair” that the EUR didn’t test the green zone and therefore never “set up”. This means I can’t claim it as a successful forecast even though it did almost exactly what I forecasted it would.
MS stopped out after a news event, and I suspect will end up also end up fulfilling my bearish price forecast, and I could dwell on that failure as something “they did to me”.
These are common mental traps that traders get stuck in which really harm their ability to remain objective and sustain their edge in the markets long term.
As a career trader who has been active in the markets for over 20 years, I know how outrageously your brain can lie to and insult you.
What is critical is to step OUTSIDE yourself and look at the ONLY THING you have control over….your forecasts!
Yes, I can’t claim the EUR as a winner. But I know a lot of folks took alternate entries and intraday positions and made some good money on the decline I forecasted and that’s GREAT!
Yes, MS got beat up by news, but that came out of the blue so was just simple market risk…
This one just offers the potential to “hurt” more because the failure had a clear “reason” to point at.
A lot of times there is no reason and forecasts just plain fail! It’s the ratio of winners and the SIZE of those winners vs losers and failed forecasts which determine performance.
So I challenge you to not take any trades you take (or miss) this week “personally”, and look at the big picture and the PROCCESS that will take you to the better future that attracted you to trading in the first place!
To Lean How To Accurately and Consistently Forecast Market Prices Just Like You See Me Doing Here Each Week, Using Market Vulnerability Analysis™, CLICK HERE to visit Market Forecasting Academy for the Free 5 Day Market Forecasting Primer.
Privacy Policy | Terms & Conditions | Disclaimer
Copyright © 2021 - Bo Yoder